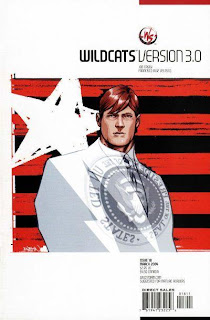 This is the best issue of the series for my money. This issue manages to pack everything in, but focuses on Marlowe and Halo primarily--and does so with skill and intelligence. But, it also works on a level the rest of the series doesn't by commenting on the larger Wildstorm universe. This issue came out the month prior to the "Coup D'Etat" storyline with the Authority overthrows the United States government (and the Wildcats Version 3.0 issue of that story will be discussed on Saturday), so Casey takes this opportunity to demonstrate how fucking stupid the Authority are--and how they may seem like a step forward in superheroics, but Jack Marlowe is the true step forward. Of course, that's also discussed in Coup D'Etat: Wildcats Version 3.0 #1 since it works primarily as another issue of this series than as part of that story.

The focus of this issue is the US government's response to the technological innovations of Halo, specifically their cars, which run on Halo batteries (and their ever-lasting energy supply). The first scene in this issue is a little over-the-top, but if Jack Marlowe is the new face of superheroics, the government is the new face of supervillainy. We get a special committee in Washington, led by a senator, that may have a fancy name but is dedicated to taking down Marlowe and Halo. Or, as the senator puts it: "SO... / ...WHAT'S IT GOING TO TAKE TO BRING THIS PRICK DOWN?" Of course, he's got his hands clasped, looks very serious and is sitting at the head of a table. You know, any time I sit at the head of a table, I always (ALWAYS!) have the urge to lean forward and ask everyone sitting around it, "So... how do we kill Superman?" That's what the senator is really asking. He is Lex Luthor, Jack Marlowe is Superman and this is the Legion of Doom or the Injustice League or whatever fancy name you want to give it.

And there is some justification here, as I've said before. The senator claims that Marlowe doesn't give a damn about America and he's right. As he told Agent Wax last issue (well, two years ago in comic book time), he doesn't care about the artificial borders humanity creates. He sees it as one world and is working to unify it. He is determined to destroy the American way of life. But... is that really a bad thing? Someone in the room raises that possibility--that Marlowe is altruistic and working for the betterment of humanity and the senator responds,

MEN IN POWER GET THERE FOR A REASON. / THEY UNDERSTAND THE INTERDEPENDENCE OF ALL NATIONS ON THIS EARTH, AND HOW THOSE RELATIONSHIPS FORM THE FABRIC OF MODERN SOCIETY. THE FRAGILITY OF THOSE RELATIONSHIPS MUST NEVER BE TAKEN FOR GRANTED. / BUT MAYBE YOU'LL BE MORE SYMPATHETIC WITH OUR GOALS IF YOU GET A TASTE OF LIFE IF THE POWER STRUCTURES WE'VE ALL INVESTED OUR ENTIRE LIVES IN SUDDENLY TOPPLED LIKE DOMINOS...

And he's not entirely wrong, either. The relationships between nations are fragile and have taken decades to form, and Marlowe is moving at a very fast pace. Yes, limitless energy is good... but what about countries that provide oil? How do Marlowe's choices affect them and how they will view the US--and, more importantly, react to the US? While we're not meant to agree with the senator, he does raise some interesting points. However, he also places a bit too much emphasis on maintaing the status quo as if things are perfect and this is the way things are meant to be, which is by no means certain--in fact, it's just wrong. Things are not good, except for those in power. And that's what this is really about: those in power. But, as we'll see next month, the steps Marlowe is taking are nothing really. He's working within the system to affect real change, but the Authority will not. But, I'm getting ahead of myself again.

Wax calls Marlowe as Downs to warn him that he's heard various rumours and such about Marlowe upsetting things too much--and how super-powered assassins are one option being discussed. Marlowe seems unconcerned. Dolby takes a conservative view, reminding Marlowe of those international relationships the senator mentioned to his staff, like "THERE'S A TRILLION DOLLARS IN SAUDI MONEY INVESTED IN OUR STOCK MARKET. ANOTHER TRILLION IN OUR BANKS." He warns Marlowe not to act like a superhero, not to go off half-cocked and "TURN THIS INTO SOME CLICHED ACTION MOVIE WITH A BAD THIRD ACT" (an ironic comment on the state this book, actually). Marlowe assures him that he knows what he's doing and his decisions will be "efficient and effective."

To that end, the issue ends with Marlowe teleporting into the White House, specifically the president's bedroom and teleporting secret service out to a desert. This act is a direct commentary on next month's story, particularly Marlowe's speech to the president:

MISTER PRESIDENT. / YOU KNOW WHO I AM. / I'LL TRY AND BE BRIEF... BUT I'D LIKE TO SHARE SOME INTERESTING STATISTICS WITH YOU. / BY THE END OF THIS DECADE... THE MUSLIM WORLD WILL CONTROL SIXTY PERCENT OF THE WORLD'S OIL PRODUCTION AND NINETY-FIVE PERCENT OF REMAINING GLOBAL OIL EXPORT CAPACITY. / THE OIL COMPANIES THAT CONTROL YOU MUST DO BUSINESS IN COUNTRIES WITH POLICIES AND CONNECTIONS DISAGREEABLE TO "FREE-THINKING" AMERICANS. / THAT PLACES YOU IN A PRECARIOUS POSITION. / [...] / FROM MY PERSPECTIVE, I SEE YOUR ADMINISTRATION CONTINUALLY MOVING TOWARD A GOAL OF WORLD HEGEMONY... / ...USING FICTITIOUS MILITARY CAMPAIGNS AGAINST "TERRORIST THREATS" AND SO-CALLED "DESPOTS" TO SECURE--BY FORCE--CONTROL OVER THE OIL SUPPLIES NECESSARY TO PRESERVE YOUR COHORTS' STRANGELHOLD ON THE FREE WORLD ECONOMY. AND ALL OF MANKIND SUFFERS FROM YOU ETHICAL IMBALANCE. / YOU SEE ME AS YOUR ENEMY BECAUSE MY COMPANY IS PROVIDING AN ALTERNATIVE THAT CONFLICTS WITH YOUR POLITICAL SELF-INTERESTS. / I'M NOT YOUR ENEMY, MISTER PRESIDENT. / I'M THE FUTURE. / AND YOU... ARE FAR FROM UNTOUCHABLE.

As evident from his allusion in Youngblood #1, Casey is a fan of The West Wing and a lot of Marlowe's actions--and his speech here, in particular--have the same optimism displayed on that show. In fact, this speech is the type that Aaron Sorkin peppers his scripts with. But, it also has elements of the superhero speech--the end, for example. This is Superman popping in on Lex Luthor to convince him that, no, he's not his enemy, they both want to make things better and they need to work together to do it, not waste time fighting one another. That isn't the exact tone here as Marlowe explicitly states that the president's motives aren't the same as his, but the implication is that they should be. What Marlowe wants and what the president should want are the same thing. This issue is a rant about politicians not serving the people who elect them. Of course, that could be why I love it so much.

The other plot of the book is the FBI agents in Athens tracking the Coda while Grifter listens in via Agent Orange. We get some insight into the female FBI agent as she discusses how lonely it is being a Fed, but it's nothing spectacular or worth discussing. It blends well enough into the rest of the issue and doesn't distract from it. That plot is advanced, which is necessary, but it's still a plot that's going to "TURN THIS INTO SOME CLICHED ACTION MOVIE WITH A BAD THIRD ACT."