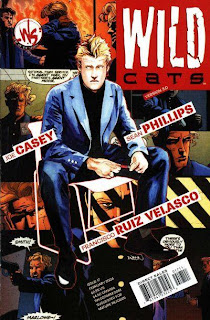 A Wax-centric issue that fills in some gaps and also shows how he's adapting to his new life as Downs. The first few pages are designed to demonstrate that Wax is a better Downs than Downs was. First, we get some stuff at home with "his" wife Miriam where they are nice and loving and seem to genuinely care about one another, which is a stark contrast from the "cold war" metaphor Downs used to describe his marriage. Then, we get various scenes of Downs at work fighting for his people, being kind and actually seeming like a decent boss--which, again, is a contrast to the Downs we've seen who was short-tempered and an autocrat.

The only problem is when Jack Marlowe shows up in Downs's office wanting answers. The conversation the two have is not entirely unfamiliar to readers as it's very similar to the one he had with Garfield back in issue 11. Here, Marlowe is a little more judgemental, but it seems only because he doesn't know what's going on. He thrives on information and needs to know what his employees are up to. Wax acts much like we'd expect: makes excuses, seems upset, deflects questions--but Marlowe cuts right through it, saying, "SPARE ME YOUR FORCED DISPLAY OF ANGST. WHATEVER ACTS YOU'VE COMMITTED... YOU'RE GOING TO HAVE TO LIVE WITH." Marlowe is... beyond the usual bullshit. He acts with thought and commitment, and expects others to do so as well. Wax has killed his boss, Agent Downs, and taken his place, it's as simple as that. As Casey shows, this is a positive thing possibly. Perhaps, the world is better off with Downs dead and Wax in his place--and, you know what, I think Wax thinks that, too. However, he acts guilty and angst-ridden because he thinks he should. Marlowe has no use for that, though.

This leads to some flashbacks drawn by Sean Phillips. First, the introduction of Agent Mohr, Wax's former partner who died during the "Serial Boxes" story in Wildcats volume two. There's also a scene showing how the two got involved in tracking Samuel Smith. In both scenes, Wax makes reference to disliking Downs, making the antagonism between them go back even further than we knew already. The third flashback shows what happened between the two volumes of Wildcats, after Marlowe teleported Wax away from Florida.

This is how Wax came to work for Jack Marlowe and has a few interesting tidbits. My favourite is when Marlowe tells Wax that the first order of business is Wax rejoining the National Park Service, Wax ranting about Mohr's death and Grifter telling him to "STOP LIVING IN THE PAST, MAN." Of course, Grifter was (and possibly still is) stuck in the past, never changing--although, here, he was on the cusp of embracing the future with Marlowe. Marlowe convinces Wax that he is trying to make the world better. The speech he gives is a little hokey, but what "save the world" speech isn't? He takes Wax up to an unmanned NASA research station that also doubles as a CIA surveillance satellite--something Marlowe sees as problematic ("AND YET, INSTEAD OF USING THESE CONNECTIONS TO FOSTER UNITY, DISPARATE NATIONS CONTINUE TO FOSTER MISTRUST... AND CONTINUE TO ACT UPON THAT MISTRUST"). He shows Wax a view of the world and points out that you can't see the borders that divide humanity... it's all one world (like I said, a little hokey). And when a super-powered android says this shit, you tend to believe him. Wax agrees to join up...

And we return to the present were Marlowe sees the advantage on Wax's new life, Wax convinced he was going to be fired. But, as we've seen, Marlowe doesn't make moral judgements often, especially when he can see a way to advance his cause. Marlowe is very much an "ends justify the means" type of thinker, viewing morality as flexible depending on the situation. A closer relationship between Halo and the NPS could be very advantageous.

The scene ends with Wax looking at a picture of Miriam that's kept in Downs's desk.

The issue ends with our trio of FBI agents in Athens hot on the trail of the Coda and Grifter listening via the bug on Agent Orange. Nothing insightful there, merely reminding us of that plotline.

This issues show the development of Agent Wax from field agent to unemployed loser to inspired Halo employee to imposter... and also hints that he hasn't really changed. In the NPS, he saw example after example of humanity tearing itself apart, specifically superhumanity. He saw how agencies supposedly dedicated to protecting innocents were often more concerned with advancing their own goals. He sees Marlowe as a real chance to save the world. He's always had superpowers, but never became a superhero. Why is that? His powers don't exactly lend themselves well to heroics, most no doubt seeing them as immoral when used... but, here he acts immorally for a larger cause. As I said, he killed Downs, but was that necessarily wrong? Is the world better off without him? This issue shows that his wife seems better off, as do his employees, and Marlowe's cause is certainly better off with Wax in Downs's place. Wax's life is also better off. It's almost like Wax is a superhero and Downs is his new secret identity...
Posted by Chad Nevett at 1:51 pm