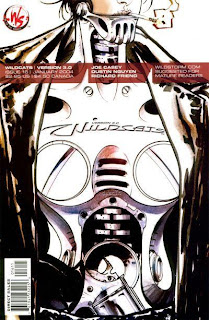 You'll note that in my little "intro/infotag" bit at the beginning of these posts, I refer to it as "Joe Casey's Wildcats Version 3.0" instead of "Joe Casey's run on Wildcats Version 3.0" like I do with every other book. It occurs to me that this may be perceived as a slight against Dustin Nguyen when really it's just that this book is Joe Casey's book. It stems from his work on Wildcats volume two and he writes the entire thing. This is Nguyen's last issue on the book, although he provides the covers for the rest of the series.

I don't think I've discussed his art at all, because I'm a literary critic and don't know how to discuss art exactly. Also, my focus is Casey. That said, Nguyen's art on this book is quite good. He does 16 issues (plus eight more covers) with great skill. I find his work a little cartoony or simplistic at times, but it realy set the tone for the book. I'm particularly impressed at how he handles talking head scenes since he is very good with action, but the non-action stuff shines. His figures can be a little stiff, but this was earlier in his career and he's only gotten better since. Not only that, he didn't miss an issue until leaving the book and, if I recall correctly, the series stayed on schedule. His art is also a nice contrast to Sean Phillips's work on the previous book, which is naturally dark and ink-heavy, while Nguyen's work is much brighter with thinner lines. Since this book is a brighter, more hopeful one, the shift in art is very appropriate.

Also, apologies for the short post on issue 15, but there wasn't much there. Thankfully, this issue has a bit more going on.

Wax continues to act as the now-dead Downs. What I find interesting is that in some panels, he's Wax and in others, he's Downs. He visits Miriam in the hospital and appears as Downs except for his shadow and in a single panel--it's designed to show how much he truly cares for her.

Throughout the issue are three full-page TV ads involving the new Halo cars. The first is for a movie, "The Longest Ride," which features the new Halo Predator (sports car), and then two more for the Halo Prestige (luxury car) and the Halo Panda (family SUV). I like the consistency of the names and how each works with the type of car. The ads are kind of hokey, but work.

We finally see the rebuilt Ladytron as Grifter Version 3.0 and Cole Cash controlling her. Nothing major happens, but I do like the subtle touch of having her smoke a cigarette--despite the fact that Cash isn't there to enjoy it. Or, is the sensitivity of the robot that great that he can virtually smoke?

Dolby continues to have nightmares about his activities as the new Grifter. Marlowe seems satisfied with the car part of Halo's business, but is already looking ahead to taking over an ISP and extending Halo's reach into that area as well. World dominaton through corporate takeovers.

The issue ends in Washington with the president meeting with a senator and one of the members of his cabinet regarding Marlowe and Halo--where he's being discussed as a rival country more than a businessman. His brash style is obviously pissing people off. The question here is his motivation: why is making this sort of technology available? What is his ultimate goal? We, as readers, almost want to jump into the comic and assure these guys that Marlowe is doing good, but he's not, really. Marlowe's goals would, ultimately, eliminate government and the conception of nation states, it seems. Marlowe has, in fact, begun the first steps to overthrowing not just the United States government but all governments.

Next issue, Sean Phillips returns and we get some more insight into Agent Wax.
Posted by Chad Nevett at 2:25 pm