[Continuing my look at Joe Casey's Wildcats Version 3.0. New posts Tuesday, Thursday and Saturday... although this post was late by a bit. Sorry.] 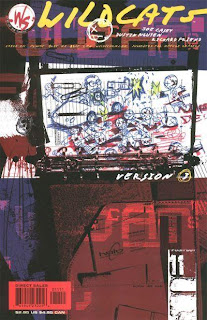 "The Night the Lights Went out in Garfield" is a strangely fitting follow-up to last issue, which ended with Dolby quitting Halo after his first black ops mission as the new Grifter went... well, not wrong, but not how he expected. This issue focuses on Dolby's former fellow accountant, Garfield, who is a very, very angry man. He hates his life and not entirely without cause. The accounting firm he used to work for that was sold to Halo? Yeah, it was his father's firm and it was sold without any notice. Now, his father lives a relaxing life of retirement while Garfield finds himself managing the creepiest office ever. One where the employees pull out guns after he leaves.

Ultimately, Garfield gets caught up in a traffic argument and kills a man. He drives away in a panic, imagines what will happen when he caught, gets drunk and is later found by Jack Marlowe. He informs Garfield that the man he killed was an undercover cop who had gone bad and that killing him was not necessarily a bad thing. Marlowe has altered records to clear Garfield entirely. He did this because Garfield is his employee and he needs him. You see, the office Marlowe has Garfield managing is a CIA shell company and he wants his own person in there to keep an eye on their activity. He's not telling Garfield that he has to keep working there or for Halo, it's his choice.

Next, we see Garfield looking much happier, relaxed and confident in his job.

There are a few other scenes in the issue. Further allusions to Halo buying out Belljar Media. Marlowe deciding that Agent Orange is fit to return to the FBI and Cole Cash pissed off about the Dolby situation. The issue ends with one of the mechanics from the NASCAR team Halo sponsors telling Marlowe about how the car kept going for 124 miles after running out gas, apparently powered by the Halo car battery.

This issue mirrors the last one, because both Dolby and Garfield came from the same place, and reacted entirely different to Marlowe. Dolby took initiative while Garfield just got pissed off. In last issue, Dolby enters into a new situation that results in him shooting and injuring a man, which causes him to sever ties with Halo. In this issue, Garfield shoots and kills a man, but this incident spurs him to embrace his employment for Marlowe. An odd twist.

We finish the first year tomorrow.
Posted by Chad Nevett at 11:29 am