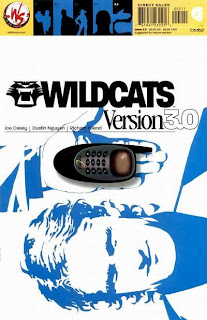 I love this issue's title, "www.cacophany.com"--still not as fantastic as "Rocktopia Part 8 of 5," but still nice.

This issue concludes the CC Rendozzo/Agent Orange/Nuclear Family story as Grifter gets beaten by Agent Orange with flashbacks to their encounter in Miami from a year previous... which went pretty much the same way. Agent Orange is what Grifter wants to be, I think: an unstoppable killing machine. Grifter does everything in his power to take Orange down and nothing works--isn't that what Grifter really wants to be?

Which, of course, leads us to Jack Marlowe, who is also what Grifter wants to be, because he is just as unstoppable as Agent Orange, just as single-minded, but also far more powerful because of his union with the Void entity. Marlowe is able to arrive on the scene and dispatch Agent Orange with little effort, teleporting him elsewhere and then teleporting himself and Grifter away.

Before this, though, Marlowe meets with Garfield, his disgruntled accountant. Marlowe wants Garfield to head up a firm recently purchased, which causes Garfield to lash out. Garfield is an interesting character as he is always angry at Marlowe, and for reasons no one can fathom. We'll learn that he is really angry at what his life has become, how he is just a small man with no real purpose. Thankfully, Marlowe will give him one in a few issues.

After Marlowe and Grifter leave the Nuclear Family's house, CC Rendozzo questions Mom and Daughter and learns that the Nuclear Family is an FBI project to create a team of agents as a family and they were charged with housing Agent Orange until the brass could figure out what to do with him. Once Rendozzo realises that Grifter and Orange are gone, Dad and Son show up, some people die, Wax and Rendozzo escape and the Nuclear Family is left to do whatever it is they do.

The issue ends with Rendozzo ready to use Wax against Marlowe... before Wax is teleported away and Rendozzo is left pissed as fuck.

Mostly action with little development, but Casey establishes the pattern for Marlowe's intervention here: he shows up and solves problems without any effort. This actually creates a problem since Marlowe is too powerful, really. What would he need Grifter and others for when he could simply use his powers to obtain what he wants? I think this relates to the idea of the Wildcats as family and Marlowe feeling that he needs to provide a place and a future for Grifter. That he has Grifter do these jobs so that Grifter will have something to do, something to give his life meaning. As well, Marlowe likes to view himself above such situations, preferring to delegate the tasks. He likes to think that he's evolved beyond things like violence and petty disputes. But, has he? Is having employees like Grifter and Wax handle these things any different from doing it himself, really? Is Marlowe just deluding himself?