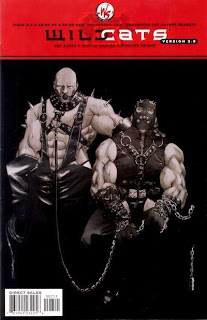 This issue begins with Dolby at a firing range with Garfield, bonding over how fucking weird Jack Marlowe and his associates are. Dolby is hesitant to shoot the gun, but, when he goes, he pretty much hits it dead centre. And Agent Wax sees all. This is how Dolby is recruited as the new Grifter.

Part of that process has Cole Cash hiring the Beef Boys, two LA S&M club guys, to trash Dolby's apartment and beat him up. Dolby acts typically scared, but also puts up a fight. He takes his beating like a man.

The other main plot of this issue is Agent Wax, who is demoted to motor pool after being absent from work at the National Park Service lately. His first assignment is driving Agent Downs's wife, Miriam, to some fund raiser. On the way, Wax stops the car and uses his hypnosis powers to force Miriam to give him a blowjob. The manner in which Casey handles this is strange as there will be no negative consequences to this act. In fact, it continues on and, eventually, has Wax replace Agent Downs entirely--but, that's a good thing. Wax uses his superpowers to rape a woman and then, later, kill his boss... and it's a good thing.

Later in the issue, Wax shops for nasal decongestants and delivers a worthwhile monologue that relates to the series as a whole:

"NOW I ASK YOU... ALL THESE PRODUCTS LITTERING THE SHELVES... / ...HAVE YOU EVER STOPPED TO CONSIDER THE TRUTHS BEHIND THIS GROSS DISPLAY...? / NASAL DECONGESTANTS, FOR EXAMPLE... / SO MANY TO CHOOSE FROM. BUT JUST HOW DIFFERENT FROM EACH OTHER ARE THEY? / A MILLIGRAM OF PSEUDOEPHEIDRINE HYDROCHLORIDE HERE AND THERE... SOME MAY CAUSE DROWSINESS, SOME MAY NOT... BUT BASICALLY, THEY'RE ALL THE SAME. / YET, SOME OF THESE SEEM TO SELL BETTER THAN OTHERS. THERE ARE DEFINITELY LEADERS IN THE RACE TO PROVIDE RELIEF FROM POST-NASAL DRIP... [/] THE DIFFERENCE IS THE BRAND. / IT'S ALWAYS THE FAMILIAR BRANDS THAT WE FLOCK TO FOR COMFORT AND ASSURANCE. / I MEAN, IT'S NOT EVEN A QUESTION OF QUALITY. GOD FORBID THEY FIND A CURE FOR THE COMMON COLD. IF THEY DIDN'T MARKET IT RIGHT, WOULD IT SELL...? / AND, FOR THAT MATTER, CAN WE LIVE WITHOUT OUR BELOVED BRANDS? ARE WE EMOTIONALLY EQUIPPED TO LIVE WITHOUT THEM...? / CERTAINLY AN INTERESTING ETHICAL DILEMMA... WOULDN'T YOU SAY, MIRIAM?"

Not hard to see how this relates to Marlowe attempt to grow Halo as a brand in order to make the world a better place, but this is also a commentary from a frustrated comics writer. Look at the basic core of that monologue and you'll see it easily applies to the comics industry where familiar names sell and quality flounders if it isn't marketed right. The best comic ever created could be published tomorrow and the vast majority of the comics-reading population wouldn't notice if it wasn't published by one of the name publishers. And, come on, are you really any different? I know I'm not. And how fucked up is that?

The issue ends with Marlowe and Cash monitoring the progress of Agent Orange's reprogramming while Cash questions Marlowe's goals and abilities. That is, until Marlowe teleports away as CC Rendozzo is on the roof and wants to chat.

Things progress and we get the initial stages of Dolby's transformation into a gun-toting killer and Wax's journey from lowly chauffeur to important agent and family man through rape and murder. Strange comic.
Posted by Chad Nevett at 2:15 pm