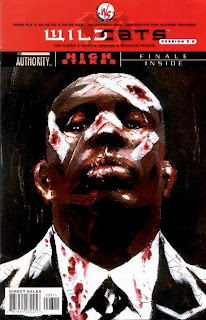 And so we enter our next action packed story as CC Rendozzo uses her knowledge of Jack Marlowe's true origins to blackmail him into helping her kidnap her son from the FBI. It's not that interesting, really, but what is is how Cole Cash adopts Marlowe's mannerisms and style in this issue.

First, we have him visiting the Beef Boys, who we'll remember as the two S&M guys who trashed Dolby last issue, and pays them more, saying, "A GOOD EXECUTIVE KNOWS WHEN TO DELEGATE RESPONSIBILITY. / CONSIDER YOURSELVES ON RETAINER." Does this sound the Cole Cash we all know and love? His injuries have put him out of commission and without his ability to kill people, to cling to his old lifestyle, he immediately begins to adopt another, the one that Marlowe has adopted. While Cash is still the one in charge of putting bullets in people's heads, he's now an executive, of sorts. VP in charge of black ops, if you will. He's even dressed up a little--it's not a suit, but it's a casual collared shirt (unbuttoned, of course) and a jacket. When he, Marlowe and Wax meet later, Wax is teleported into the meeting not fully dressed and Cash says, "JEEZUS CHRIST,MAN... / ...YOU THINK YOU COULD DRESS FOR THE MEETING NEXT TIME? / FUCKIN' UNPROFESSIONAL..." Wax takes that as a joke, but is it?

Marlowe wants to use Agent Orange for Rendozzo's job, but Grifter still doesn't trust Orange and has plans for Dolby. A little corporate recruitment, one would say. The issue ends with him visiting Dolby at a firing range, tells him that he sent the Beef Boys, that he's impressed with Dolby and asks, "SO... ARE YOU READY TO TAKE THE NEXT STEP UP THE CORPORATE LADDER...?" Cash, in this issue, acts like a corporate exec, because he has no other way to act. He works for Marlowe and since he's in a wheelchair, the only way to get by is to conform to the corporate environment in which he finds himself. That means throwing money around, taking the initiative, and poaching employees... even if that employee already works for your boss.

The other subplot of the issue if Agent Wax's continuing... affair with his boss's wife and his boss beginning to suspect already. This may seem unusual, but he is supposed to be a highly skilled government agent, so his noticing some inconsitencies in his wife's behaviour is believable. If he suspects Wax's involvement is a whole other question. He may, but it may also be his utter dislike for Wax.

There's a scene with Wax and Miriam (which is how he winds up at his business meeting half-dressed) where we learn that this is the first time Wax has used his power in this way--he says to a hypnotised Miriam, "I FEEL DIRTY. / DOESN'T FEEL BAD THOUGH." He also seems to think that Miriam isn't entirely against what happens between them, that, yes, it requires his power, but not that much. Agent Downs and Miriam's marriage isn't a happy one and maybe Miriam would get a kick out of sleeping with someone her husband hates just as much as Wax enjoys screwing his boss's wife. Maybe Wax sees himself as doing something good here, that Downs deserves to be cheated on, that Miriam deserves someone who actually likes her... I don't know. But, Wax does speak the truth when he says things will get complicated.

Next issue: Dolby trains to be the new Grifter.
Posted by Chad Nevett at 10:01 pm