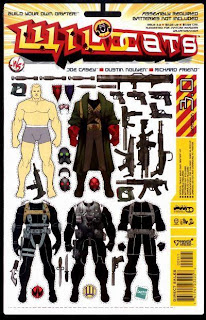 A lot happens in this issue. Like, it begins with one of the race cars Halo sponsors doing tests and the car keeps going for over twenty laps (that we know of when the scene ends) after the gas tank says it's empty. And that car has one of those fancy Halo batteries under the hood. Hmm.

The rest of the issue is preparation for next issue where Cole Cash supervises Grifter (Dolby) and the Beef Boys as they infiltrate an FBI base to kidnap a child. This is a family book, of course.

Cash and Dolby's stuff picks up right where it left off: Dolby has a gun pointed at a wheelchair-bound Cash and is threatening to pull the trigger. And then he does. Except there are no bullets left--Cash counted and he's impressed that Dolby pulled the trigger... right up until Dolby pukes.

The next scene has Agent Wax visiting CC Rendozzo in the middle of the night at the behest of Jack Marlowe to let her know that things are proceeding as planned. This is mostly to touch base for the reader, let us know of her personal involvement. Although, there is a great panel where Wax puts on her hat, she says that it's a woman's hat and Wax replies, "I'M COMFORTABLE WITH MY SEXUALITY," which is both a smartass answer and a reference to his using his powers to hypnotise Miriam Downs into sleeping with him--something Wax is very comfortable with.

This segues into the personal aspect of this mission as we get a few pages of Special Agent Tyro and his son--who is also Rendozzo's son. The kid is a chip off the old block, training to become the youngest agent in history (although, would he be considering the Nuclear Family?). What this tells us is that the kid doesn't want to be rescued. But, that doesn't really matter, now does it?

The rest of the issue is Dolby becoming the new Grifter. First, he's told about Cash and Marlowe's past. Then, Marlowe appears, wondering what the fuck Cash is doing. His response is rather amusing when Dolby insists that he "DIDN'T HEAR ANYTHING ABOUT ALIENS OR IMMORTALS OR ANDROIDS...": "MISTER DOLBY, BE ASSURED, I HAVE THE UTMOST CONFIDENCE IN YOUR ABILITY TO ADHERE TO YOUR CONFIDENTIALITY AGREEMENT, NO MATTER HOW EXTREME THE INFORMATION MAY SEEM..." Normally, this is when threats of physical retribution occur, but Marlowe resorts to business threats.

The training of Dolby is interesting, but not important overall. It is a few pages of "How to be Grifter"--or, relating to the cover, a few pages of Cash building himself a new Grifter. My favourite part is Cash instructing Dolby how to hold a gun: "HOLD IT LIKE THIS... COCKED TO THE SIDE... / REMEMBER, THE COOLER YOU LOOK, THE LESS LIKELY IT IS YOU'LL ACTUALLY HAVE TO SHOOT." The training isn't just about how to kill and how to survive, but how to fit in. There's even a panel involving "witty rejoinders." Casey shows us what it takes to be Grifter and it isn't as impressive as you'd think. It's half skill, half bullshit.

The issue ends with Marlowe chewing Cash out for using Dolby, but Cash insists he knows what he's doing--and why shouldn't he? He's, as I put it last issue, Halo's VP in charge of black ops. If Marlowe wants him to run the mission, he needs to let Cash do it his way--which he accepts.

Of course, Cash is totally wrong. But that's next issue.
Posted by Chad Nevett at 10:34 pm