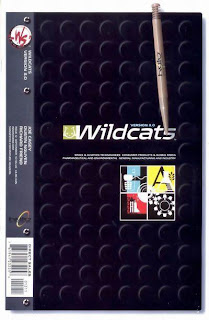 Did you know that this is the 500th GraphiContent post? Well, it is, and is there any better way to reach that number than to discuss the final issue of the first year of Joe Casey's Wildcats Version 3.0? Ah, probably, but this is still pretty good, eh? Let's get on with "Level One Effect"...

In this issue, Halo buys the Belljar Company, which gives them access to all sorts of media outlets and, well, furthers Jack Marlowe's path to world domination. But, for the first time, we see that he needs others to accomplish his goals. Up until this point, there has been a sense that Marlowe uses others because he wants to for various reasons (loyalty and appearances being the two major reasons), but, here, he demonstrates that he needs Dolby to help him. Part of buying Belljar means dealing with its shareholders, a task Marlowe has no experience in since Halo is privately owned. That isn't that surprising, but Casey also shows Marlowe needing others in a subtler fashion.

Near the beginning of the issue, Cole Cash is doing physical therapy to recover from his leg injuries when Marlowe appears to tell Cash of the discovery that a racecar was somehow powered by a Halo car battery after it ran out of gas. Now, this is partly Casey reminding us of this development, but it also demonstrates Marlowe's social needs. He stops by to tell Cash about his day, basically. Now, Marlowe and Cash don't particularly like one another, but they're family and that matters. It's a subtle reminder of their dependency on one another and that Marlowe is more than a distant, emotionally detached android. Cash provides no insights, nor does Marlowe solicit any. It's a social visit disguised as an employee briefing.

Marlowe manages to convince Dolby to return to work despite Dolby still having nightmares about shooting Special Agent Tyro. Marlowe makes a convincing case by explaining his goals and by telling Dolby that he needs him. And, yeah, Dolby helps the shareholders meeting go well.

Cash even apologises to Dolby for ignoring Dolby's lack of desire to be the new Grifter, focusing on his talent instead. Cash does provide insights that we've been aware of for some time: "NOW IT'S LOOKING LIKE I'M THE ONE OUT OF FASHION AROUND HERE. / YOUR BOSS HAS A NEW WAY OF DOING THINGS, AND I'VE BEEN FEELING... OBSOLETE." It's been apparent that Cash is part of the past, while Marlowe is the future. In this series, Cash has been progressing, but not enough. He's still a man of violence, a "gunslinger" and "loose cannon" as he puts it. And he admits that using Dolby as he did was probably a way of getting back at Marlowe.

There's an interlude in this issue where Agent Wax has sex with Miriam Downs at a National Park Service party... and makes the mistake of leaving the condom on the floor of the custodian's closet. This is not good for Wax.

The issue ends with Marlowe looking at holograms of Cash, Dolby, Garfield, Agent Orange, Wax and CC Rendozzo... and it's suggested that these are representations of each of them as they are at the moment. Surveillance footage, if you will. Marlowe spying on his people and musing over the future, while fondling a Halo battery. In the final panel, he says, "IT'S GOING TO BE AN INTERESTING YEAR." It has been and the next one certainly is as well.

On Saturday, we begin the second and final year of the book.
Posted by Chad Nevett at 11:22 pm