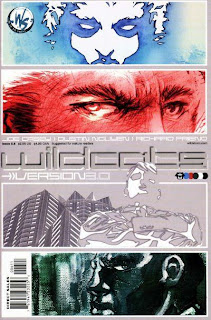 Ah, now this is more like it. "A Month in the Life." is a slower issue that focuses on character and the corporate side of things. It begins with a "Datebook" segment on Halo: it revolves around Halo's batteries which are, essentially, endless. The most important bit is a US senator saying, "I, FOR ONE, WOULD QUESTION THE MOTIVE OF JACK MARLOWE. WHY A MAN -- AN AMERICAN NO LESS -- WOULD DEVELOP GROUND-BREAKING TECHNOLOGY AND KEEP IT HIDDEN IS CERTAINLY A CAUSE FOR CONCERN." This is the beginning of the problems Halo will have with the government, particularly as the company expands into other areas. As well, this quote points to the main motivation for the problem being the advancement of technology beyond the accepted limits as determined by other corporations, those who contribute to the campaigns of politicians. Why would Halo be expected to share its technological secrets--or the idea even raised, except for the nervousness of rival companies who then have their lackeys in congress question the patriotism of Marlowe, owner and CEO of Halo? Is Coke expected to share its formula? The message here is clear: don't fuck with the status quo.

Garfield continues to hate Marlowe and his new job, which he feels isn't worth his time since the office doesn't need a manager. But, we'll learn why exactly Garfield is there later.

On the thinly-veiled "Larry King Show," Marlowe goes about trying to embrace his fame a little more as Dolby suggested. Here, we learn that Halo has sponsored a NASCAR team and is in talks to buy out Belljar, including its subsidiary, Worldwide Media. "King" calls the move huge and Marlowe responds, "THE HALO CORPORATION DOES NOT MAKE SMALL MOVES. WE THINK BIG, WE ACT BIG... AND WE WALK TALL AND PROUDLY..." Very much a superhero thought process, particularly one in step with fellow Wildstorm heroes, the Authority. Note how Marlowe's methods differ, though.

There's an interesting scene where Dolby runs into Grifter and Agent Wax outside of Marlowe's office. Grifter is in a wheelchair and makes it very clear to Dolby what his role at Halo is. This is the beginning of Dolby's induction into the inner circle. It causes him some concern and moves him more in step with Garfield's thinking.

Marlowe wants to reprogramt Agent Orange to act as a mole inside the FBI for him. Grifter hates the idea, because he hates Agent Orange--or, as I've suggested, is jealous of Agent Orange. But, Grifter does pose a question: "YOU'LL HAVE A FED ON THE PAYROLL. PERFECT FOR A MAKER OF BATTERIES. LET ME ASK YOU SOMETHING... / ...HOW DOES THIS FIT INTO YOUR PLANS?"

Marlowe responds, "BATTERIES WERE JUST THE BEGINNING, GRIFTER. THIS ENDEAVOR IS MUCH BIGGER THAN YOU REALIZE. / BUT, ONE THING YOU ARE QUITE ADEPT AT REALIZING IS THAT IT'S BETTER TO HAVE A GUN AND NOT NEED IT... THAN TO NEED A GN AND NOT HAVE IT. / I AM LEAVING NOTHING TO CHANCE." We get a hint about the scale on which Marlowe operates and that what we've seen is barely anything. Batteries that last forever are just the beginning of his plans... At the end of the issue, we get a little bit more of his plans as Halo introduces a new personal computer that has more memory than other PCs, an endless power supply thanks to Halo batteries and, of course, is "AVAILABLE IN ONE OF TEN DESIGNER COLORS." Obviously an allusion to Mac, but still another step forward.

Next issue, we meet the Beef Boys and Wax rapes his boss's wife for the first time.
Posted by Chad Nevett at 6:02 pm