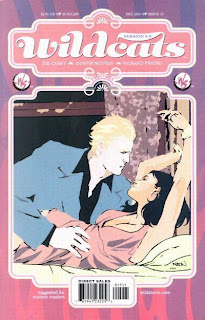 The confrontation between Agents Wax and Downs is quick as Downs tries to shoot Miriam and Wax uses his powers to make Downs kill himself. Quick and effective. Wax then assumes Downs's identity using his powers.

This issue suffers from continuing to set things up, particularly stories that... seem antiquated somehow. A good chunk of the issue is taken up by Zealot fighting Coda and Cole Cash testing out his new artificial Grifter proxy--the rebuilt body of Maxine "Ladytron" Manchester, which he controls in a fluid tank where his movements are mimicked by the robot. We don't actually see "her" yet. The concept is rather intriguing, though; in one step, Cash rejoins the field, does so as a woman AND as an artificial lifeform similar to Jack Marlowe. Grifter Version 3.0 matches the book, in a way.

The issue ends with a little bit more on the Halo cars where it's revealed that they've received top marks from consumer studies in all areas and there's a lot of buzz, particularly concerning the limitless energy source powering each car. Marlowe makes a nice little statement about how it's about time this has happened and it is for the betterment of the world. Nothing too original.

Basically, the book is in... well, not a holding pattern--it's just more concerned with action and violence than corporate intrigue and politics. It can't seem to break free of its roots. And things don't get better in coming issues.
Posted by Chad Nevett at 5:55 pm