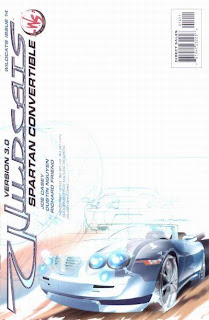 One of the things I particularly like about this issue is the beginning where we get a window into CC Rendozzo's life now that she has her son back. Basically, her son hates her, wants to go back to his father to resume his training, and is a complete little shit. It reminds me of Cole Cash and Jack Marlowe. It's an extreme parallel, but Marlowe is CC while Cash is Donovan; the former has his ideas about how things should be, the latter has different ideas and wants to do things his own way. Now, Cash is an adult and could leave at any time, but he's also more experienced than the kid--he knows the importance of familial bonds and having a place in the world. Cash could leave and were he younger, he would, but he's not a young man anymore. Despite his disagreements with Marlowe, there's a part of him that not only needs Marlowe, there's a part of him that wants to stay where he is.

That said, Cash does get to do a little field work in this issue. He goes along with the Beef Boys and, when things get too rough, he shoots a bazooka out the back of a van. He even has his mask on. Because, while he needs and wants to stay with Halo, he's got to be true to himself. This scene further foreshadows his re-entry into the field--albeit in a compromised manner.

The situation with Agent Wax and his boss, Agent Downs progresses to a dangerous spot as Downs sets Wax up to find Downs and his wife, Miriam in the sewer, far from the eyes of the world, where things can be settled. Downs figures out that Wax has superpowers and it looks like he's going to kill both Wax and Miriam. But, that's next issue.

The main plot here is the unveiling of the new Halo cars. First, there's the product placement in a blockbuster film. Remember the film director from issue five? He's back and he's been "bribed" to do some reshoots with a new Halo Predator. Although, the gift is more a nicety by Dolby since Halo owns Belljar, which owns the studio that's making the film and getting reshoots done isn't a problem, really. A subtle showing that Dolby knows that brute force isn't always necessary--something Marlowe tends to fall back on a bit much, because of his past. There's also hints that this is too big a step, these cars that don't require gas. I mean, Halo cars are outfitted with Halo batteries as their power source and those batteries have an infinite amount of power... it kind of changes the way the world works rather quickly, doesn't it? Casey drops a few hints about the upcoming political backlash Marlowe and Halo will face.

Next issue, Wax kills Downs and assumes his identity.
Posted by Chad Nevett at 8:10 pm