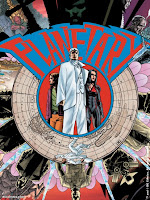 I recently reviewed Planetary #27 for CBR and, in the process, wrote the following sentences: "After issue 26 ended the conflict between Elijah Snow, the 20th century’s version of an anti-body and leader of the Planetary Organization, and the Four, a superpowered group dedicated to keeping humanity down and suppressing achievements that could make the world far better and more advanced, there is only one final piece of unfinished business, one looming loose end: Ambrose Chase, Planetary’s ‘Third Man.’ Apparently shot and killed in issue nine, Elijah and his group, Jakita Wagner and the Drummer, have possibly found a way to save him."

You can read the rest HERE!
Posted by Chad Nevett at 12:27 am