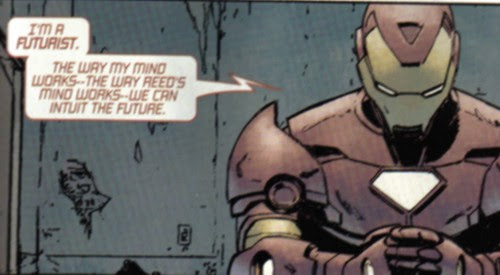 Throughout the whole "Civil War" thing, the word "futurist" has been thrown around a lot to describe Tony Stark and Reed Richards. But what is a futurist? Is it, as Stark describes here, someone who works towards the future, or is it really a member of the Italian art and drama movement of the early 20th century that fetishised technology, violence, youth, urban living and was eventually tied closely to fascism?

I just find it amusing that the word is thrown around quite a bit, but there's that other meaning to it that seems to fit so well. Tony Stark is all about technology; for the Futurists, it was fast cars, while for Stark it's a suit of armour where he becomes a machine basically. The Futurists were heavily interested in the idea of humans being like machines or body parts replaced by machines. Stark has a machine heart basically. He is all about living in the city and, goddammit, he is one violent guy, isn't it?

To tie it to Civil War a bit more, here's the first paragraph from "The Futurist Synthetic Theater, 1915" by Filippo Marinetti, Emilio Settimelli, and Bruno Corra:

As we await our much prayed-for great war, we Futurists carry our violent antineutralist action from city square to university and back again, using our art to prepare the Italian sensibility for the great hour of maximum danger. Italy must be fearless, eager, as swift and elastic as a fencer, as indifferent to blows as a oxer, as impassive at the news of a victory that may have cost fifty thousand dead as at the news of a defeat.

For a guy who claimed to be doing it for the greater good, Stark always was a little too gung-ho on the fight, wasn't he?

Now, I'm not suggesting a direct connection here. It's just something I find interesting. It could be sheer coincidence or, maybe, it's one of those subtextual things that was thrown in for a laugh.

Just something I thought of and figured I'd put out there. Something to keep in the back of your head.

For more on Futurism: this site has a lot of good info.
Posted by Chad Nevett at 7:26 pm