The Future is Mundane and Oh So Typical 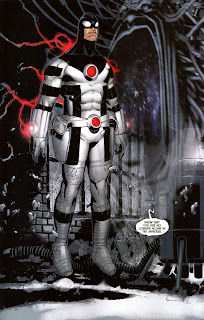 I gave Dark Avengers annual #1 four stars in my CBR review. And I genuinely believe that, when read from an objective (or as objective as one can get) and within the proper context, it deserves that rating. Had I delivered my subjective review of the comic, it wouldn't have gone so smoothly, obtaining probably something in the 2-2.5 range. I'll admit that it didn't raise my ire as much as previous Bendis depictions of Noh-Varr, but it did irk me. It shouldn't have since it's been so obviously apparent that the Noh-Varr of Marvel Boy was long gone since Zeb Wells brought him back during "Civil War" to fight the Runaways and Young Avengers. Instead of the young, radical alien from a culture that legitimately is more advanced than ours, he was simply an angry young Kree that was sometimes from another dimension, sometimes not. There was no advancement of his cause to recreate Hala on Earth. No moral quandries. No sex and disgust for humanity. No sign of him being anything other than a misguided youth in need of a stern lecture from Representatives of the Status Quo. And they called him Marvel Boy.

If ever there was a sign that people didn't really understand what they were dealing with, it was saddling the character with the title of the comic in which he appeared during which the words 'Marvel' and 'Boy' did not meet. Am I being nitpicky? Sure. Am I acting like an entitled fanboy, one who thinks he has some sense of ownership over the character? Probably. Is it just a fictional character, so getting upset or outraged is somewhat sad? I suppose so. But, I don't care.

What happens in Dark Avengers annual #1 isn't character growth, it's magic. Noh-Varr has grown a little bit over his time in the Marvel Universe, not quite so ready to take over and change everything, but his progression to that point was too quick. Wow, the Illuminati give him some bullshit speech about how his alternate reality caveman ancestor Mar-Vell was a good Kree between letting Namor sucker punch him... a Skrull imposter of Mar-Vell got Stockholm Syndrome... Noh-Varr couldn't figure out that he was on a team with a bunch of criminals despite learning extensively about human (specially American) history/culture upon his arrival...

Where in this would it be entirely logical for him to care about humanity? I'm truly wondering. If anything, all of that should make him hate the simplistic and stupid thinking that abounds in humanity. They put thugs and criminals in charge! They think they're heroes! If that isn't a system in need of a complete overhaul, I don't know what is. No, instead, he wanders around and wonder what humanity wants... why? That is like me finding myself in past by several thousands of years with the ability to remake society in a superior manner and caring what they think. Who cares, they're backwards-thinking apemen who obviously don't know what they're doing! That is the mind of Noh-Varr... the End of the Way Things Are...

The only way to get him from that point to where he ends up is via the Supreme Intelligence of his universe (and to show how advanced he is, he builds the means to communicate with his homeworld in another dimension from spare parts), which declares that he will protect this Earth. I believe the Kree Empire of that universe deciding that, because their behaviour in Marvel Boy is very much of the benevolent protector, searching the multiverse for ways to make things better... and, thus, they transform Noh-Varr, alter him, make him something different...

Make him mundane and typical. A round peg in a round hole where once he was square. I won't even get into that awful, boring costume design that doesn't fit into the Kree designs we've seen to date...

In the end, he stops being Noh-Varr, he becomes the new Captain Marvel. To be fair, he stopped being Noh-Varr when he returned at the end of Civil War: Runaways/Young Avengers #2. He was Marvel Boy then. He's since become Captain Marvel. And it's boring. If his journey had actually been that of the hero -- if he had actually encountered situations that caused him to mature and change his way of thinking, I would buy it. But, that didn't happen. In fact, the opposite happened as he encountered reason after reason to tear it all down... until he was transformed into thinking differently.

I used to get angry about this sort of thing, but I can't bring myself to care anymore. Writing this has just killed it. After a while, how could I not just give up? After all, the future was once x-rated and, now, here we are, nearly ten years on and it's just mediocrity and safe and boring... It's not my character; it never was, but, now, it most certainly is not. Enjoy your Captain Marvel. I'm done caring.
Posted by Chad Nevett at 12:45 am