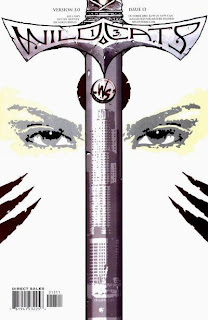 The larger story of the second year "begins" here (it was actually set up in Wildcats volume two, but let's ignore that): Coda War One. A good chunk of this issue features Zealot in Spain killing Coda. We're also introduced to FBI agents Chandler and Addison who are assigned to work with Agent Orange on tracking and taking out a group of female assassins in Europe. These two things are connected, obviously.

Agent Wax shows Cole Cash the torso of Maxine "Ladytron" Manchester, which is being kept in a tank in some room in the Halo building. Cash doesn't care, but this scene does get the thought process started when Cash says, "ALMOST A SHAME, REALLY. SHE WAS ONE HELLUVA WAR MACHINE... A WALKING ARSENAL..." Cash is about two steps away from rejoining the field without leaving the building. Grifter Version 3.0? Heh.

Wax's subplot also kicks up as he reveals that he's been demoted to motor pool, which Cash finds pathetic. Also, that condom Wax left at the NPS fundraiser after having sex with his boss's wife? It was found, analysed and now Agent Downs knows that Wax and his wife have had sex. We also get a short scene involving Wax and Miriam where she's woken from his influence and pretty much reaffirms that this is rape. Wax sees it a little differently, saying, "THIS MAY NOT BE ONE HUNDRED PERCENT CONSENSUAL, BUT YOU'VE HAD YOUR MOMENTS OF WILLINGNESS, BELIEVE ME. [...] LOOK, YOU'VE TOLD ME BEFORE YOU WEREN'T HAPPY. LIFESTYLE CAN'T MAKE UP FOR A LACK OF PASSION. YOU SAID IT YOURSELF. ONE OF YOUR MORE PROFOUND MOMENTS UNDER THE INFLUENCE..." These short bits of dialogue hint that Wax cares for Miriam and, more than that, doesn't view his actions as that wrong. He sees himself as something of a hero, in a way. He appreciates her where her husband cheats on her; he provides passion and caring... I mean, he likes her so much that he keeps using his hypnosis powers to fuck her... Classy guy, a regular knight in shining armour, eh?

Rounding out this issue are a couple of Marlowe/Dolby scenes where work progresses on manufacturing Halo cars that will run on Halo car batteries as their only fuel source.

The Coda, the FBI, Grifter Version 3.0, Wax/Downs, and the Halo car are the plots for year two and this issue acts as an introduction to all of them. Nothing of great import, just set-up mostly.
Posted by Chad Nevett at 12:33 pm